Eric Volz is the founder and managing director of the David House Agency, an international crisis resource agency specializing in helping individuals facing wrongful detainment and other legal and political situations abroad. Volz was recognized by the New York Times as “a highly sought crisis manager” for Westerners and travelers entangled in criminal prosecutions overseas.

Volz’s international business career started in 2004 when he successfully launched and published the bilingual El Puente (EP) Magazine in Nicaragua, a conscious living and smart tourism magazine that quickly became the largest bilingual magazine in Central America and the Caribbean. He went on to establish an investment consulting practice and co-own a Century 21 franchise.

In November of 2006, while living in Nicaragua, Volz was wrongfully imprisoned by an anti-American judicial system and found himself at the center of an international ShowTrial. After a tireless campaign on behalf of his family and friends, and intervention from the highest levels of the U.S. government and other international figures, an appeals court overturned his conviction and Volz was released in December of 2007.

After returning to the U.S., St. Martin’s Press published Volz’s memoir, Gringo Nightmare: A Young American Framed for Murder in Nicaragua. The book details his wrongful imprisonment and political undertones of the case, an ordeal that would  become the foundation for his future life’s work.

Bill Kurtis, host of A&E Network's Investigative Reports, American Justice, and Cold Case Files said about Volz’s book, "This story should be issued with every passport.” The book received international media attention after it was published, and Volz subsequently did a speaking book tour around the U.S.

He began to be approached by families of other wrongfully imprisoned individuals who had no where else to turn. It soon became clear that there was a great need for guidance on how to navigate the complexities of a ShowTrial. After several years, what began as pro-bono advice evolved into a private consultancy in 2009. The need became so great that Volz incorporated the David House Agency in 2011. Regarded as the only organization of its kind, the agency has been instrumental in the release of 17 men and women, incarcerated in Europe, Latin America, Asia and the Middle East.

Volz has been a guest on and featured in major international media outlets speaking on the topic of international ShowTrials and the David House Agency’s case work. He is a native of Northern California, and holds a degree in Latin American Studies from the University of California, San Diego.

Author lectures in English and Spanish. For availability and rates email .(JavaScript must be enabled to view this email address).

If your book club has selected Gringo Nightmare to read, the author may be able to "visit" via phone. If interested, email info@friendsofericvolz.com with "book club" in the subject line. 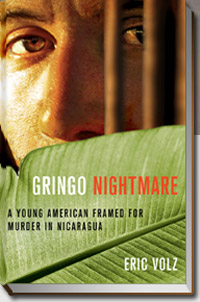 Gringo Nightmare: A chilling tale of how political pressure and a rigged judicial process led to the conviction of an innocent man; and a powerful story of how one man's faith in the truth, combined with grassroots pressure from people around the world who had never met Eric Volz, eventually helped to end an unjust imprisonment.
—KC Johnson, author of Until Proven Iinnocent